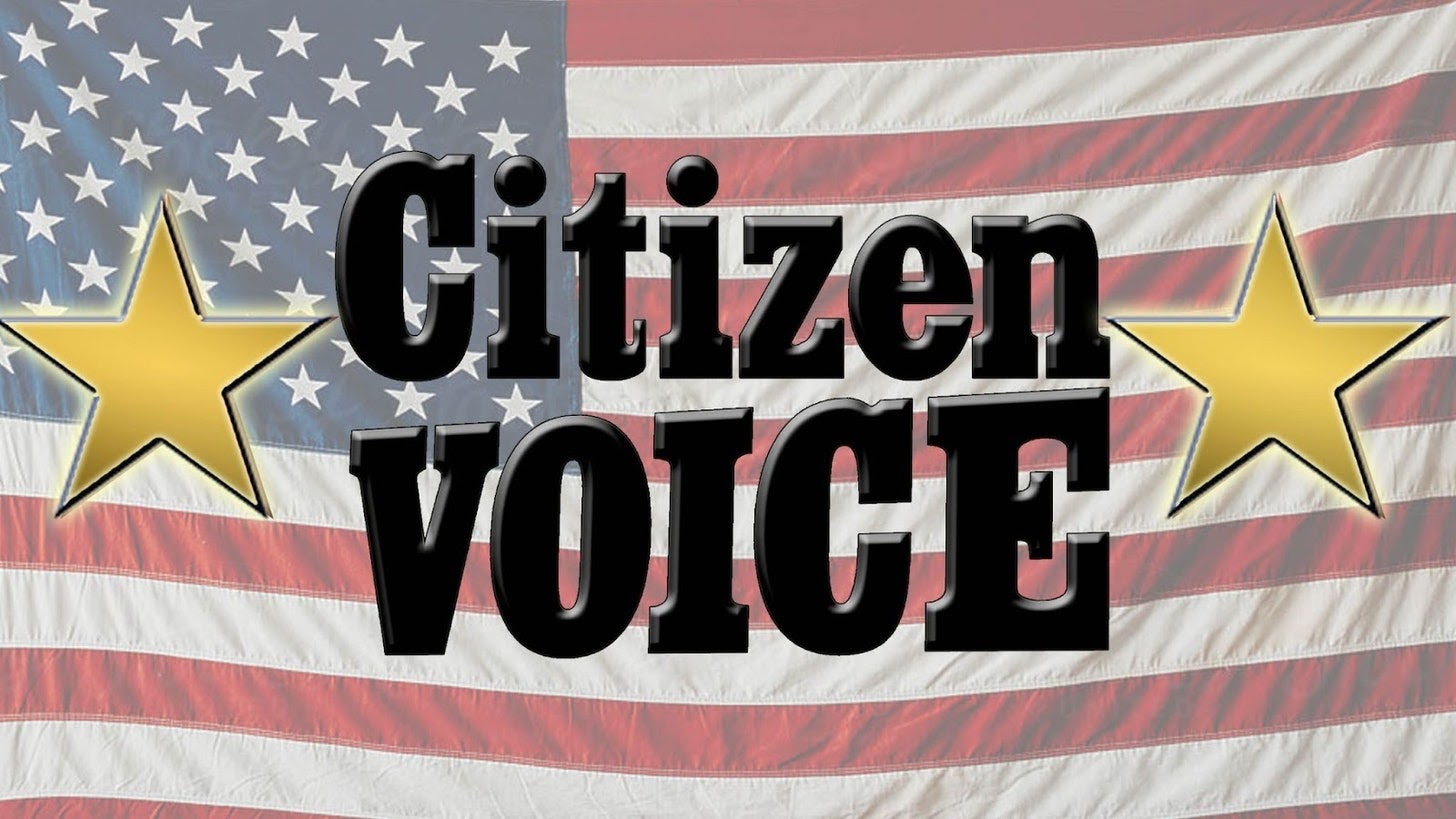 Citizen Voice is now exclusively being distributed through Substack. We are getting back to “business as usual” in the sense of focusing on providing our “Cornerstone” readers with what we have been doing for over five years – trusted news stories and honest commentaries on the major issues of our time. Our network of great grassroots volunteer writers are not worried about losing a job or their livelihoods, and they “shoot” straight and give readers a great deal to think about. But, our effort is not just about the writers. Readers can become more than just readers. Reader efforts and contributions are just as important as I see it. It has always been the driving idea of the Citizen Sentinels Network that it is a network of “We the People.”

So, we are also asking our readers to be more than readers: we are asking our readers to share our articles with friends, family, associates, or anyone you feel would benefit by our news and views and aggregated links to even more news! It is truly the pathway to becoming a genuine “bona fide” Citizen Sentinel! If you have been a reader for a while, you know we have been at work, continually developing our format and our style to provide more for readers without the rest of the hype and noise that “clutter” other sites. It is too much distraction and takes focus away from what needs to be focused on. We need to focus on important stuff!

Readers can also contribute by helping add to, or compile, our aggregated links. We have three main sections of aggregated features: “Video Views,” Recommended Reading,” and “Around the Republic.” If readers feel we should put an article into the Bulletin or the Thursday newsletter, they can send those links directly to one of our editors at: PrincipledRepublic@gmx.com

Today’s Citizen Voice Bulletin features an article from Craig Huey, who is from California, who has a definite message about the current recall election of Governor Gavin Newsom. His words in this article are very perceptive regarding what is currently happening in the tarnished “Golden State.” It is a sad state of affairs here, but Californians who care deeply about our state and also about America as a Free Republic, are awakening and taking action. Rightly so, Huey explains what I have in the pages of our newsletter: “For those watching the pivotal recall election in California, at this time last week Larry Elder had been banned from the election, but the attempt by the OneParty state failed, and Larry Elder is leading in the polls — a sign of an incredible turn of events in California that could signal an incredible turn of events in America!” Californians are not ready to lay to rest our freedoms that so many patriots fought and died for in the fight for Liberty!

There are a number of great video clips today. We have a great clip from Bannon’s War Room and a wealth of contemporary, fast moving focal points to zero in on the most pressing issues of the day. The other great videos include a speech from Mike Pompeo (we offered the full version in the Sunday edition). There is also a great interview of David Horowitz by Tucker Carlson. We carried over Pastor Earl Wallace’s video of the Biblical Basis of the Bill of Rights, in case anyone had missed it. We still attempt to offer a wide-angle view of what we face as Americans.

Please know that the Citizen Sentinels Network is in a growth mode just now — not because we have a great deal of financial resources at our disposal, but because we have great citizen volunteers from the grassroots. It is truly because God is showing us a great deal of favor, and we are grateful we can develop in such a turbulent time. Our main education efforts and all our information outreach will continue through Citizen Voice — as we have rebranded this effort, but the CSN Network is also continuing to develop — onward and upward as well. There are other projects of activist – oriented outreach that are being developed. We will announce these as they emerge from planning to the substantial initiation as the efforts roll out. Just know this: the Citizen Sentinels Network is growing and developing, and we will continue to make the strategic changes necessary for success.

Please try to take into consideration the additional aggregated news features. We truly try to provide readers with a “go-to, digestible package” of the current critical news spanning the nation and in some cases, reaching across the globe to provide stories that affect us all. One reader said it is like an online equivalent of the “Reader’s Digest.” There are a number of other links to articles dealing with a wide array of issues in the “Recommended Reading” section as well as “Around the Republic” aggregated stories. Read or view what catches your attention or what you’re interested in learning.

Remember, all of this is designed to wake up all of “We the People” who are not yet awakened. CSN is truly an effort of “We the People” regaining our lost sovereignty over our divided nation. Ownership does not just imply belief or faith in our cause; but, it involves substantial ownership as well, if we are to regain our lost sovereignty in America. Please do your part to awaken those who are still asleep. Forward our Bulletin today. Last point: We are extremely grateful for all of our compatriots who have given donations to the CSN; if you are a Citizen Sentinel help us!

Remember to sign up for a free subscription to Citizen Voice – or donate, so CSN can continue our efforts!     https://citizensentinelsnetwork.com/donate/ 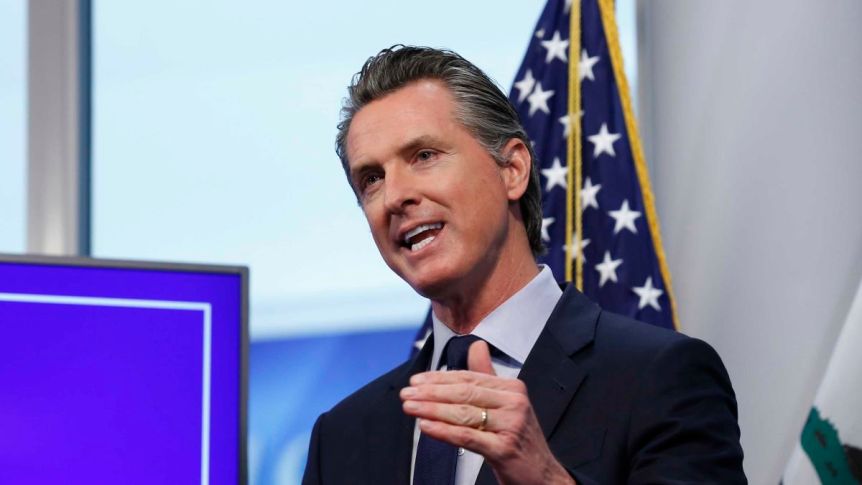 The epic battle for Governor Gavin Newsom to keep his political seat has become a nationwide effort.

Across the United States, the Democrat Socialists have united in sending Gavin Newsom volunteers, paid staff and money…lot of money.

And it looks like Newsom may still lose his job.

Here are six things you should know:

#1. The recall election is on September 14. It will be an all mail-in ballot.

The recall has two questions:

Question #1: “Should Gavin Newsome be recalled? Yes or no?”

If fifty plus one votes say yes, Gavin Newsom is recalled.

If Gavin Newsom gets 50 plus no votes, he stays as governor.

The second question is “Who should replace him?”

There are some very good candidates on the ballot who would be an excellent California governor.

And there’s some really bad ones.

We will be analyzing each of these top candidates next week.

40 candidates in all are running.

The one who gets the plurality will win.

Yes, the plurality – not majority – will win.

#2. The polls are showing Gavin Newsom could lose this election.

A tsunami of despair has swept across the Socialist Democrats. They are in a panic.

Because according to the Los Angeles Times Berkeley poll, among likely voters: 47% say yes to the recall. 50% say no.

In other words, it’s in the margin of error.

This is surprising in that the Republicans are around 20% of the California registered voters.

Independents are a little bit more.

And yet Newsom does not have the support.

Worst for Newsom is there is little enthusiasm.

If he does lose in the recall election, then the candidate with the highest votes will win.

Right now, the top candidates are Caitlyn Jenner with 3%, John Cox and Kevin Faulkner are tied for 10%, and Larry Elder has 18%.

Gavin Newsom is getting donations throughout the United States.

You see, under California law, Newsom does not have donation limitations on how much money can be given in a recall election.

Unions and large organizations are giving him $1 million-$5 million at one time.

For example, the SEIU gave him $5 million.

But money can’t buy you love.

His elitist attitude, his failed policies, and the disintegration of the state of California. There is the water and electricity crisis, the crime spike, the oppressive lockdown, the unnecessary mask mandates, the massive homeless invasion, the high unemployment compared to other states, and much more.…he has an uphill battle to overcome.

In 2016, President Trump was as badly outspent by Hillary Clinton, similar to what we see in this race. Yet Trump won because people were mobilized and got people out to vote.

That could be duplicated in California with a pro-freedom candidate actually being governor of a heavily Democratic-dominated state.

#4: Newsom is trying to buy the election.

Gavin Newsom is giving away billions of dollars to parents with kids, to renters, to as many groups as he can from the state surplus of $75.7 billion.

He even made California the state to give at least a billion dollars to illegal immigrants for healthcare.

Will his giveaways and bribes work? I don’t think so.

#5: We will be endorsing a candidate and posting our endorsement on the website.

For those who live in California, or know someone who does, stay tuned.

We will soon be evaluating the best candidate for Governor.

#6. Help us defeat Gavin Newsome in this epic recall.

Gavin Newsom may be able to outspend everyone, but we can do a better job at mobilizing the targeted audience than anyone else in order to get out the vote.

Between our advanced digital strategies and use of advanced marketing, we will be able to defeat Newsom which would create the tsunami against the socialists.

Podcast – From Dinesh D’Souza: JUSTICE FOR SOME – The Dinesh D’Souza Podcast – 8/3/21   (In this episode, Dinesh exposes the two-tier justice system in this country through a detailed comparison of the January 6 defendants and Antifa and BLM rioters. Dinesh shows how the Capitol Police seek to become a national surveillance organization akin to the Soviet KGB or East Germany’s Stasi. Dinesh reveals how the Supreme Court could uphold Mississippi’s ban on abortion without overruling Roe v. Wade.).

American Minute by William J. Federer – American Minute for August 2 – The Navy torpedo boat, PT-109, was rammed and sunk by a Japanese destroyer on this day in 1943. The captain, who sustained a permanent back injury, became president of the United States, John F. Kennedy.

From the Wall Street Journal: Investors Lost Hundreds of Billions on China in July – 7/30/21

From Red State: Oh My: Biden COVID Advisor Admits Basic Truth the Admin Has Failed to Say for Months – 8/2/21

From Christianity Daily: Christian CEO Who Was Fired From Company Over Stand On Marriage Wins Case In Court – 8/2/21

What affects one, can affect all!

From California Globe: Newsom Outspent All Other Recall Candidates 200 to 1 in July – 8/2/21

ICYMI > From Forbes Breaking News: Larry Elder Reveals His First Actions As Governor If He Wins The California Recall Election – 7/30/21

From The Christian Post: New Mexico late-term abortion clinic accused of experimenting on over 500 women without consent: report – 8/2/21

From From BizPac Review: Cuomo pushes private businesses in NY to run ‘a vaccine-only establishment’ – 8/2/21

From From BizPac Review: De Blasio tightens restrictions: ‘If you want to participate in society fully’ show proof of vaccination – 8/3/21