Yet another busy week in political news, as thousands of peaceful protesters set fires in Kentucky and elsewhere and police officers are shot.

Our writers remain hard at work throughout it all, trying to make sense from nonsense. Judith La Montagne compares the candidates in the upcoming presidential election and details the Left’s plan to cheat using mail-in ballots. If the Democrats win, both Biden and Harris will be puppets controlled by the most radical elements in our political world.

I review a fascinating video by Steve Deace, a conservative commentator and polling expert who has evaluated recent polls and found them to be 100% fake. The Democrats are commissioning these polls to demoralize conservative voters and pave the way for a contested election. I discuss how patriotic citizens can fight back against the Left Media and restricted speech.

Judy McLeod follows with a story of one such victory over fake news and censorship. Whatfinger News is leading a strong challenge to the formerly-conservative Drudge report and is now dominating right-oriented political information. They are definitely worth checking out.

Craig Huey shares the shocking story of a California church that is being punished for having inside services and how this is a larger story of anti-Christian sentiment and biased judges.

Michael Lewinski points out that while many churches have been shut down, abortion clinics were open for business, and if the Democrats win in November, abortions will be more common than ever before.

Finally, our Founder, Dennis Jamison, who is still on the road, shares a free invitation from Family Research Council to the FTC Values Voter Summit, which starts tomorrow.

The November 2020 election has proven even more controversial than 2016. President Trump won the fierce battle against Hillary Clinton when the votes were counted, but it was a squeaker. I couldn’t stay up to watch the results because I feared what would happen to the country had Hillary been elected. That was a close call.

The same fears, on steroids, are present in the current election except that the Machiavellian schemes are even more dire. Trump must win because our very Constitution is at stake. The media and its celebrities are once again downgrading Trump while worshiping at the feet of a candidate who would be unable to run the country if elected. We cannot turn the country over to the machinations of evil persons who want to overthrow it. The people will choose between a Republican candidate who loves his country or a Democrat who would destroy our Constitution. But quite frankly, the government would be run by Joe Biden’s henchmen because Biden himself is simply unable to serve.

There is no doubt President Trump is a skilled politician. Intellectually and policy-wise, Trump has captured the support of ever more voters as he has supported the Constitutional rule of law and order. Biden would be a puppet, supporting the Left’s agenda while disrespecting the American people. He would obediently bow to the Socialist ideas of the Democrats to defund the police, support the Green New Deal, and vigorously tout abortion rights.

Why all the fake polls?

Once again we are seeing scores of polls saying “Biden has a commanding lead” in the election, “Biden leads in Ohio,” and “there’s no way Trump will win Virginia.” Isn’t this what Hollywood does, remakes of old movies hoping the new version will do better than the original? We were lied to in 2016, will we be fooled again?

Steve Deace, a conservative commentator and polling expert, recently reviewed four recent polls and examined their “internals” – the details on how the poll was conducted and who was interviewed. He carefully analyzed the models used to predict the election and how the various voter segments were over or under-sampled.

He described each of the polls as “totally worthless” for various reasons. So why are these pollsters disclosing their methodology showing they are seriously flawed? One would think that a polling organization would pride itself on accurate results, especially when the real poll comes out in November. Why would you hire them if they can’t get the right answer?

Whatfinger News: Leading the Battle To Save America From Socialism

In the midst of grueling Election Campaign Blues where the majority of mainstream and social media seem to be backing the Democrat transformation of America over to a complete misery-causing Socialist State, comes great News: Whatfinger News is gaining significantly on the Fake News disseminated daily by the once Conservative-leaning Drudge Report.

That’s the kind of WOO-HOO NEWS that has passionate lovers of America, including Canada Free Press (CFP) over the moon!

‘Whatfinger News Is Now Larger Than Almost All Aggregates Under Us Combined! ONLY Drudge is larger’… Sgt. Pat, Whatfinger, Sept. 20, 2020.

“President Trump is right…. Drudge is declining and Whatfinger is taking up the slack.

A judicial activist told Dr. John MacArthur of Grace Community Church in California to shut down his church services. Here are 8 shocking things you should know:

Similar to churches across America, Dr. John McArthur held packed-out church services several times last Sunday. But in California and a few other states the government refuses to let that happen. The California pastor defied Governor Newsom and local officials and opened his church. A Los Angeles Superior Court judge issued a preliminary injunction to stop the church services.

Shocker #2: The Judge who denied Grace Community’s constitutional right to hold church is a judicial activist … and is biased against the church. Judge Mitchell Beckloff is a Democrat with animosity towards Christians. Being married to another man, Beckloff had to know about MacArthur’s stand on homosexuality. Beckloff is a pro-socialist judge who has contributed to Hillary Clinton. Beckloff’s 18-page ruling ignored his previous agreement with Superior Court Judge Chalfant who held that MacArthur could open his church. Beckloff ignored the constitutional issues and simply agreed with the government decision to close down the church.

The Right To Life

During the Pandemic abortion providers were allowed to remain open and kill unborn children. This happened at a time when we were not permitted to attend church and worship God.

If Sleepy Joe Biden and his Democratic Socialist/Communists Party gains power after the 2020 election, taxpayer-funded abortions will become as common as flies on a hot summer afternoon. The effort to murder black and white babies will go unabated. Margret Sanger was a racist who waged a genocidal war against “Negros.”

Sleepy Joe Biden and his gang of Democratic Socialist/Communists have anything but Christian values. The Marxist Black Lives Matter crowd and Antifa anarchists strongly support the right to have an abortion.

Here is the invitation from Family Research Council about the FTC Values Voter Summit: 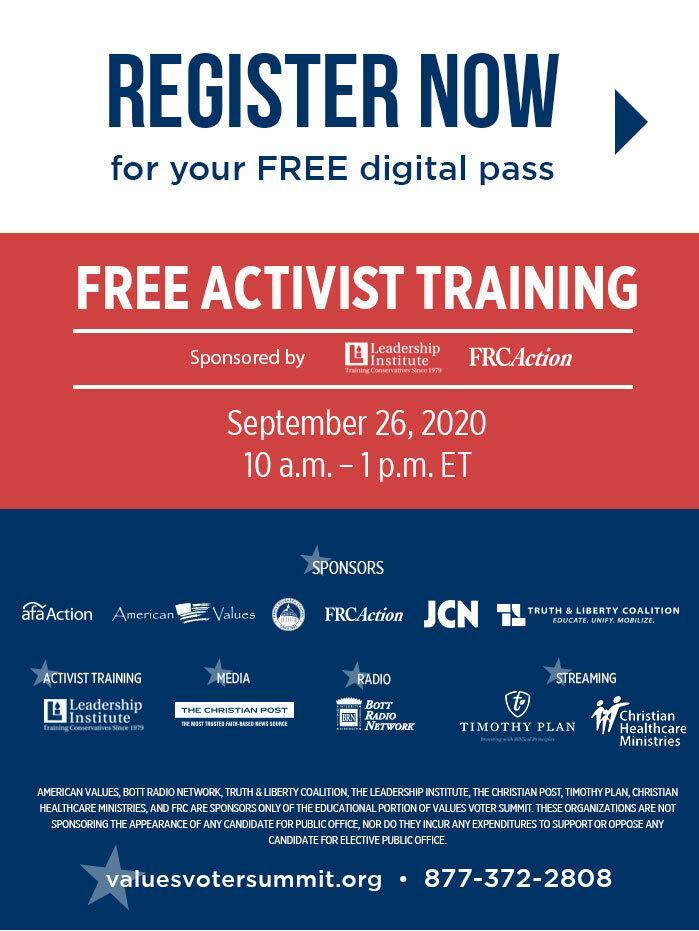 From FOX Business News: Levin: These are ‘hardcore radicals’ dressed up as Senators, Congress – 9/23/20

NewsNOW from FOX: SCOTUS DRAMA: Kayleigh McEnany Says Democrats Throw A Fit When They Don’t Get Their Way – 9/22/20

From The Eric Metaxas Radio Show: Newt Gingrich On The Supreme Court Judge To Replace Ruth Bader Ginsburg Before The Election – 9/21/20

From The Hill: Woodward: Historians examining the Trump era will ask ‘What the F happened to America?‘  – 9/22/20

If you would like to help, please consider joining our efforts to spread the truth about the coming election to over 4 million voters in Facebook groups. Learn more about joining our team of “Facebook Warriors” here.