The Citizen Sentinels Network’s Tuesday, “Citizen Voice Bulletin” has successfully launched and will be the format we now offer on Tuesdays. We hope you will enjoy our “Citizen Voice Bulletin” and continue reading. We are also grateful for all of the patriots who have made contributions to the CSN because we intend to grow in 2021, and every little bit helps.

Additionally, we are now asking readers to please accept responsibility as Citizen Sentinels. We ask that our readers take responsibility to forward any links to articles or relevant videos to our staff, and we will consider posting them in our various editions. The Citizen Sentinels Network is intended to be a forum and a voice for “We the People.” We believe that it is your network and thus, your newsletter, your bulletin. Send article or video links to PrincipledRepublic@gmx.com

Equally important is to please accept responsibility as Citizen Sentinels to forward the articles, the Bulletin, or the CSN Thursday newsletter to those whom you think would benefit from the information. The CSN is totally focused upon providing up to date articles and information, or thought-provoking commentaries to help citizens consider and ponder the important issues of the day. Accurate substantial information and honest commentary, not fake news, helps all citizens to become well-informed and able to base actions upon intelligence, not ignorance.

We feature one article from our network of writers in this Bulletin format. This edition of the Citizen Voice Bulletin will feature an article from A. Dru Kristenev. Her article, posted just yesterday, takes a hard look at the crisis in Texas that claimed people’s lives and left millions without power, not only in the state of Texas, but across a wide swath of the United States.    The link to the original article is at the end. This article brings into question the Joe Biden Administration’s severe policies that originated on his first day of his signing frenzy.

The aggregated news features behind the links provide a broad array of points to inform readers that the MSM usually would not disseminate to the public, certainly not this story. Despite the continuing ‘sins of omission’ of the MSM and the suppression of the free exchange of relevant information, as well as the misinformation and disinformation perpetrated on the public, the true pursuit of truth and justice should not cease, will not cease. Be a Citizen Sentinel!

Biden administration culpable for ERCOT’s inability to fend off freeze 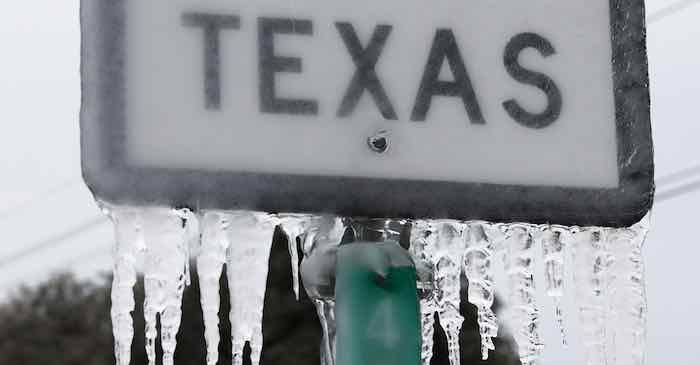 Media distraction tactics went into overdrive by going after Senator Ted Cruz, ERCOT and Governor Greg Abbott as responsible for the fatal effects of the frigid weather that blasted through Texas last week. The finger pointing has one purpose       – to send focus as far away from the Biden administration as possible.

The executive order that unveils the real culprit behind the deaths that never should have occurred was posted by Gateway Pundit.

Informed ahead of the weather system’s arrival, Governor Abbott and ERCOT applied for relaxation of environmental standards to access enough regional energy to keep homes and businesses warm enough to stave off frozen pipes and, in the end, fatalities due to the extreme cold. Acting Secretary of Energy David Huizenga denied the requests because firing up more natural gas and other fossil fuel generators would surpass the emission allowance regulations.

Utter contempt for life and property is undeniable as the secretary disallowed access to “local” and inexpensive power, forcing ERCOT to purchase insufficient energy from distant sources at up to 430 times the rate paid a year ago. The brutally callous decision that valued unscientifically-based environmental standards above human lives leaves the administration fully culpable for the weather-related deaths and destruction.

This inconceivable scenario is being sold to the public to force acceptance of an irrational Green New Deal which, were it ever to be instituted, would guarantee thousands more dying in future severe weather events.

The whole concept of carbon capture technology has gone a step beyond most rational persons’ capacity to grasp. Legal Researcher Toddy Littman put it into terms that stretched the imagination, explaining that the ultimate goal of power-hungry corporatists was to collect and store carbon in such a way that the general public would be placed in a position where they must purchase back carbon in order to survive.

Sounds like science fiction, but then, so did the idea of neuron replacement in order to cross the transhuman boundary to increase control over populations. At his insistence and coaching, that concept was written into the book “Blood Barons” in 2012 and it wasn’t until 2016 that IBM shot off a press release about neuron replacement advances to change brain activity. With a history like that, it’s hard to dismiss the concept out of hand.

Whatever nefarious rationale lies behind the GND and pushing so-called renewable energy, reliance on iced-up wind turbines and frosted solar panels, reducing them to environmental rubbish, completely failed the test during this frozen episode. Renewables have proven to be a fantastic boondoggle that has cost lives and millions in property damage.

Wind and solar are untenable for more than the fact that they are fair-weather energy producers. The equipment relies heavily on petroleum-based products to make the components, like the non-biodegradable two-story-tall blades of the wind turbines.

Accountability for this latest and avoidable tragedy lies squarely at the feet of the Biden administration and the rapidly increasing number of executive actions that are artificially creating power shortages and unreasonably inflating costs, all of which are endangering lives.

Human lives, however, are at the bottom of the pile in terms of importance. Encumbering the public with insurmountable debt and subsequent suffering is top priority – if it entrenches a ruling class that can make a buck off of it.

Here’s a solution: For redress, there are administrative procedures available to individuals who have suffered loss due to circumstances caused by government agency policies and regulations. The responsibility for widespread damage from sub-freezing temperatures in this weather disaster lands on the shoulders of Department of Energy’s acting secretary and Biden administration policies that denied Texans (and perhaps citizens of other states) access to crucial energy, especially when early requests to waive regulations were made through proper channels.

To start the process download the SF95 form (https://www.va.gov/OGC/docs/SF-95.pdf) for making a claim of damage, injury or death. Time limits may be applicable.

A. Dru Kristenev — Bio and Archives

Former newspaper publisher, A. Dru Kristenev, grew up in the publishing industry working every angle of a paper, from ad composition and sales, to personnel management, copy writing, and overseeing all editorial content. During her tenure as a news professional, Kristenev traveled internationally as a representative of the paper and, on separate occasions, non-profit organizations. Since 2007, Kristenev has authored five fact-filled political suspense novels, the Baron Series, and two non-fiction books, all available on Amazon. Carrying an M.S. degree and having taught at premier northwest universities, she is the trustee of Scribes’ College of Journalism, which mission is to train a new generation of journalists in biblical standards of reporting. More information about the college and how to support it can be obtained by contacting Kristenev at cw.o@earthlink.net.

From The Gateway Pundit: Texas Deaths May Be Due In Part to Biden’s Garbage Climate Change Executive Order and Related Actions – 2/20/21

From Blaze Media: John Kerry declares Earth has 9 years to avoid climate catastrophe: ‘There is no room for B.S. anymore’ – 2/19/21

ICYMI> From Glenn Greenwald: The False and Exaggerated Claims Still Being Spread About the Capitol Riot – 2/16/21  https://greenwald.substack.com/p/the-false-and-exaggerated-claims

Around the Republic  What affects one, can affect all!

From One America News: Biden faces CHARGES after Trumpers’ Boomshell truth over ‘election fraud’ in Arizona – 2/22/21