We successfully have been completely successful in the launch of our Citizen Sentinels “Citizen Voice” Live Video Program. As mentioned previously, initial programming of “True U.S. History” lessons will continue and then we will merge into the second phase of the project with relevant interviews of citizen patriots and true public-servant-minded leaders. Our first phase will reach completion by Easter, which is next Sunday, and we will then move into the second phase of providing both the history lessons and the interviews on alternate weeks.

For those not yet “plugged-in”  to our video project, the “Citizen Voice” Live Video Program has moved to Mondays! We ask that readers check it out on Monday afternoons during the month of April via live-streamed streamed programs from 1:30 – 2:30pm PDT or 4:30 – 5pm EDT, and all the relative times “in between in local viewing areas.” We are grateful for our hosts at Wisconsin Christian News network that are projecting the half-hour program on their site. You can tune in next Monday by accessing this link:   https://wcntv.net

Again, we are growing as a network of committed citizens and we urge newsletter readers to take ownership of the CSN and our efforts! It is truly an effort of “We the People” regaining our lost sovereignty over our nation. As explained, ownership means not just belief or faith in our cause, but it involves substantial ownership as well, if we are to regain our lost sovereignty in America. We are extremely grateful for our compatriots who have given donations to the CSN. We ask all members in the various networks and coalitions that have been established (through the six + years of our volunteer efforts) to contribute a minimum of $1.00 U.S. dollar each month to buy “stock” in our growth and development of all that CSN stands for in such a turbulent time. What we are doing may surprise some, but it is definitely more than just the educational focus of our newsletter.

Take up your watch! Become a Citizen Sentinel! https://citizensentinelsnetwork.com/donate/

In our Citizen Voice Bulletin today, I offer an article on the recall of Governor Gavin Newsom.

I have much more to say about the California governor, but only so much can be stated in a brief article. A great book on this topic, Recall Newsom, written by California legislator Kevin Kiley (yes there are still a few conservatives alive and well behind enemy lines in California), helps readers understand much more why he needs to be removed from office. There is a newly “appointed” POTUS who should be removed from office as well, but that may take more time.

The new feature of the Bulletin, an “Alert,” features an announcement from “1776 Unites,” an effort that was founded by Bob Woodson as a project of the Woodson Center to combat the New York Times’ “1619 Project.” The Woodson Center is quite active, and for those interested there is an upcoming video program titled: “Desegregate Poverty” announced and a link where people can register now.

Additionally, we hope you enjoy all the features we offer in our other three aggregated areas to help our readers get a comprehensive perspective of the news in recent days. Some links take readers to some heavy-duty news; much of it is centered upon the border crisis. But, we ask people to become aware of the nation we live in and not just stop there, but to take well-thought-out actions to stand for the principles embedded in the founding documents, to take a serious stand for the survival of the Republic.

Finally, we thank our committed readers who have already taken ownership as Citizen Sentinels, and who have forwarded appropriate links to articles or relevant videos to our staff, as we have put the ones considered applicable to that particular edition. Continue to send article or video links, or your questions on articles available in exchange for larger donations to PrincipledRepublic@gmx.com

Through the business doxxing threats of Kirschner, the Democrats are enforcing the outcome of Election 2020 as legit

How To Ensure That Elections Can Be Manipulated Forever 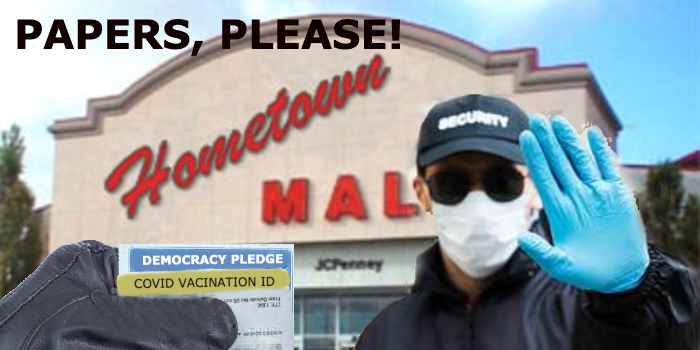 Surviving against all odds in an already Covid-ravaged 2021,  the privilege of being in business now relies on a business operator’s willingness to declare—publicly declare—that the outcome of the 2020 election was legit.  In order to survive, business operators must ‘cry uncle’ to former federal prosecutor,  now NBC News and MSNBC analyst Glenn Kirschner, or make ready to sink their own ships into deep and murky waters.  In other words, repeat in public that the fractious 2020 election was not only legitimate but positively kosher—or join America’s woefully long unemployment lines.

If Kirschner has his way, there will be no escaping the enforced ‘Democracy’ Pledge

Thanks to savvy World Net Daily writer Bob Unruh, who picked it up from a Huffington Post report, Kirschner has found the perfect way to silence any and all

“A progressive activist is pressing American businesses to adopt his opinion and declare to the public that the 2020 election was legitimate. (World Net Daily, March 25, 2021).

“Glenn Kirschner, a former federal prosecutor who is now an analyst for NBC News and MSNBC, is promoting his “Democracy Pledge,” the Huffington Post reported.”

Try not to vomit when made to repeat Kirschner’s revolting pledge:

“The pledge states, “The 2020 presidential election was free and fair, and produced accurate, reliable results.”(WND)

If Kirschner has his way, there will be no escaping the enforced ‘Democracy’ Pledge:

“Kirschner warned that he will publicize the names of companies that decline to adopt his opinion or don’t respond. (WND)

“Consumers then “can make their purchasing decisions accordingly.”

“You can’t support Donald Trump and argue that you are in favor of free and fair elections,” he said. “If you’re supporting him, you’re just not supporting democracy.”

Can one man trash your cash by sinking your business and send you to the poor house, calling it “Democracy”?

Can one man trash your cash by sinking your business and send you to the poor house, calling it “Democracy”?

The Legal Insurrection blog said Kirschner wants every business in America to adopt his opinion or they “will presumably be subjected to the cancel mob.” (WND)

“Kirschner asks every business to sign his statement and promise to “not support, donate to or endorse politicians, political campaigns or political action committees that promoted false conspiracy theories surrounding the 2020 president elections (or otherwise acted in ways contrary to a representative democracy).” (WND)

Should businesses be forced to say the 2020 election was fair?

“What we’re trying to do is force companies’ hands so they can’t be agnostic,” Kirschner said, the Huffington Post reported.” (WND) 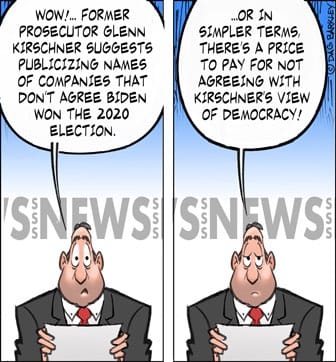 “Paul said: “What I would say is that the debate over whether or not there was fraud should occur, we never had any presentation in court where we actually looked at the evidence. Most of the cases were thrown out for lack of standing, which is a procedural way of not actually hearing the question.

“There were several states in which the law was changed by the secretary of state and not the state legislature. To me, those are clearly unconstitutional and I think there’s still a chance that those actually do find their way up to the Supreme Court.”

“Stephanopoulos interrupted. “I have to stop you there. No election is perfect. But there were 86 challenges filed by President Trump and his allies in court, all were dismissed. Every state certified the results. Can’t you just say the words, this election was not stolen?”

“Paul responded: “What I would suggest is that if we want greater confidence in our elections, and 75 percent of Republicans agree with me, is that we do need to look at election integrity and we need to see if we can restore confidence in the elections.”

‘Doesn’t ‘matta’, Senator Paul, through the business doxxing threats of Kirschner, the Democrats are enforcing the outcome of Election 2020 as legit.

Repeat after him—and repeat it publicly: ”The 2020 presidential election was free and fair, and produced accurate, reliable results.”

Last week I forwarded a message from Bob Woodson and the “1776 Unites” program that was a weekly update of their activities. Here is the information about a program of interest tonight from “1776 Unites” and the Woodson Center… 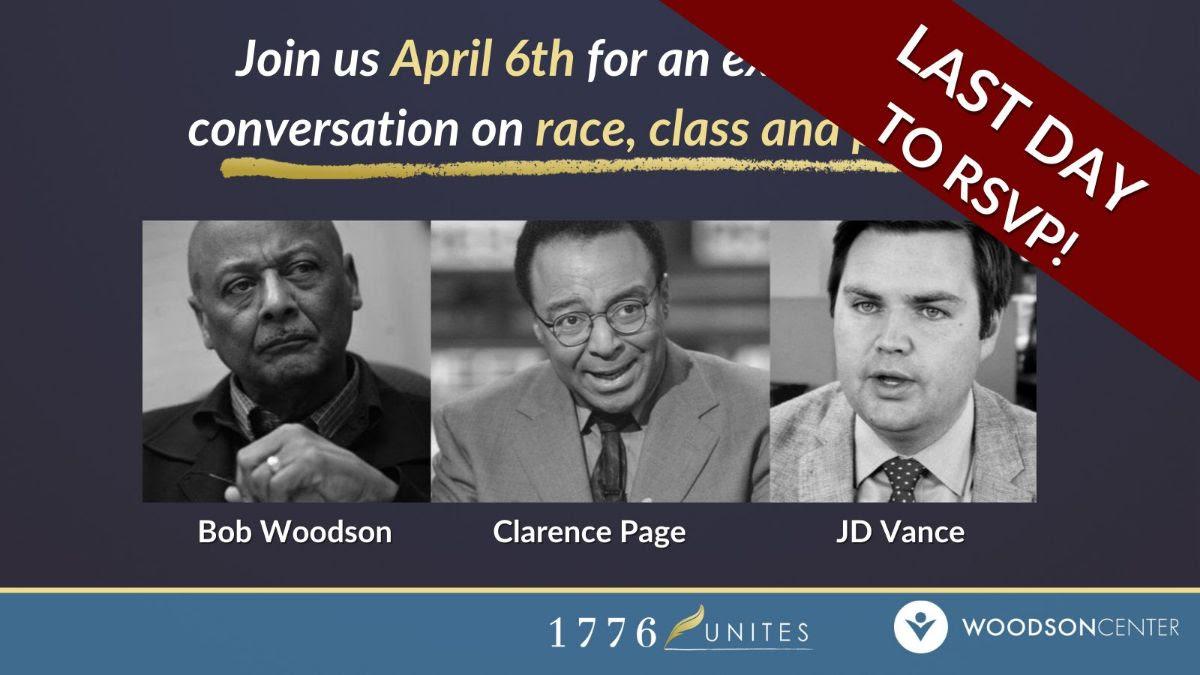 1776 Unites scholar and journalist Clarence Page and bestselling author J.D. Vance sit down with Bob Woodson to discuss race and class in America. Woodson Center and 1776 Unites are proud to host this urgent conversation. We’re happy to report that over 1,400 supporters, concerned citizens, and community activists have already registered. Please join us!

From Epoch Times @ American Thought Leaders: Bob Woodson describes how the legacy of the Civil Rights movement has been weaponized

From Jan Jekielek and The Epoch Times: A veteran of the civil rights movement, Mr. Woodson argues that the legacy of that movement is being perverted and weaponized to punish whites. We discuss the devastating human cost of the “race grievance industry” he believes is gripping America today.

Also: Be sure to check out Bob’s in-depth interview on C-SPAN, in which he discusses his latest book, Lessons from the Least of These, the failures of the government’s “war on poverty,” and the valuable lessons he’s learned from true grassroots antipoverty activists, distilled into his ten Woodson Principles. 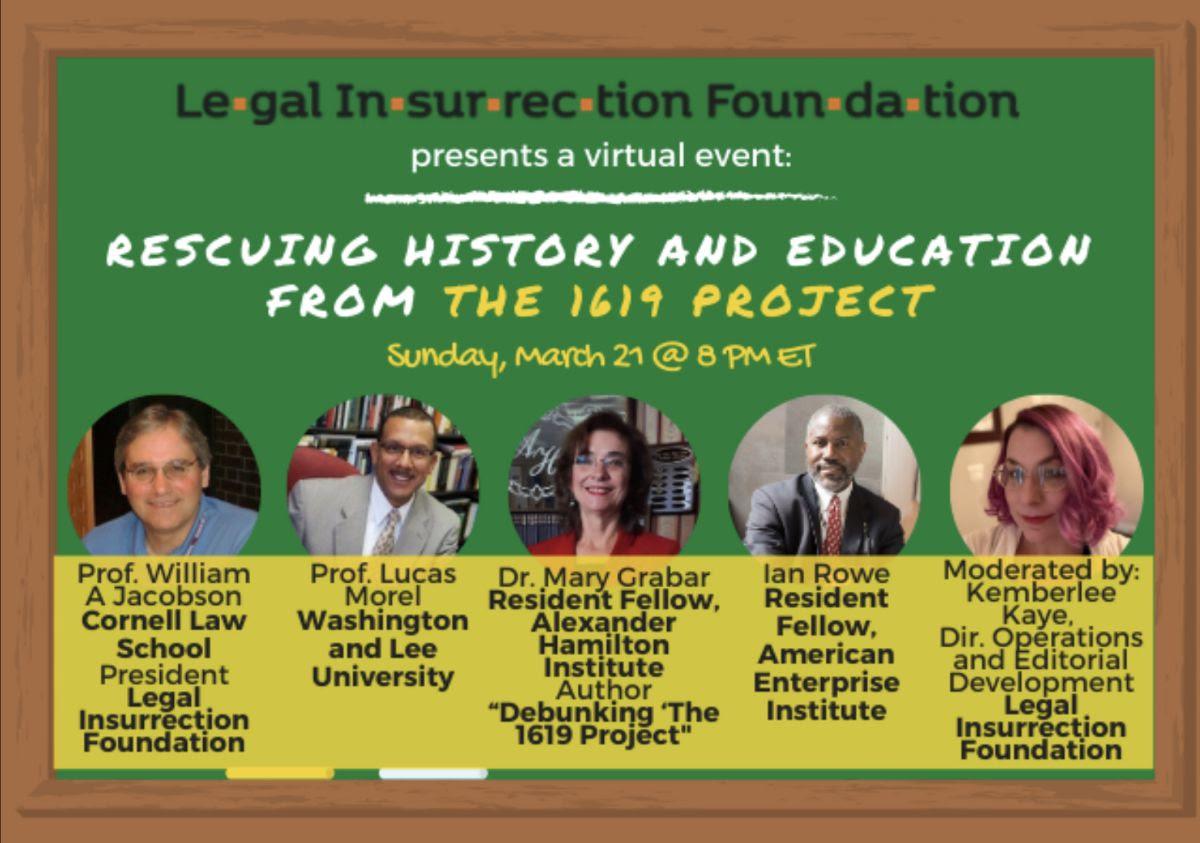 “It’s really important that people do something. I almost don’t care what you do, but do something. And when we have millions of people doing something, they’re not going to know what hit them.

Tune in to Citizen Voice on Monday (3/29) by accessing this link below:

From Blazing Press: THE TRUMP INTERVIEW THAT WAS SCRUBBED OFF OF YOUTUBE, FACEBOOK AND OTHER BIG TECH PLATFORMS – 3/31/21

From Canada Free Press: Ray Di Lorenzo – All For the Greater Good? – 4/5/21    https://canadafreepress.com/article/all-for-the-greater-good

From The American Mind newsletter: A fresh lesson in the un-American cost of chilling online political speech – 3/31/21             https://americanmind.org/salvo/terms-of-servitude/

Around the Republic  What affects one, can affect all!

From FOX News: Portland police officers are leaving in droves. Here’s why… – 4/5/21        https://www.youtube.com/watch?v=rSwQqXwjAQY