Today, after a summer of violence that left 167 murdered and almost 900 maimed, Lightfoot now has a new target to blame for the city’s years-long problems with gunfire and violent crime –  Republicans.

Chicago last had a Republican mayor 88 years ago in 1931. The Democrat machine runs every facet of life in Chicago. But Mayor Lightfoot points the finger of blame-shifting at Republicans for the rampant crime in her city.

This after Texas Senator Ted Cruz tweeted a message that pointed to a Breitbart storyabout the wholly unsurprising but still horrific body count from just the first half of Labor Day weekend.

Gun control doesn’t work. Look at Chicago. Disarming law-abiding citizens isn’t the answer. Stopping violent criminals—prosecuting & getting them off the street—BEFORE they commit more violent crimes is the most effective way to reduce murder rates. Let’s protect our citizens. https://twitter.com/breitbartnews/status/1168272622209163270 …

At least 25 people were shot, seven fatally, during the first half of Labor Day Weekend in Democrat-controlled Chicago. https://trib.al/xcy08IX

24.4K people are talking about this

Cruz has a valid point. Generations of gun control in Chicago has done nothing to stem the violence there. What’s more, Cruz notes how if you don’t prosecute the bad guys and take them off the street, they tend to commit ever more violent crimes.

That upset Heronner. She lost it.

60% of illegal firearms recovered in Chicago come from outside IL—mostly from states dominated by coward Republicans like you who refuse to enact commonsense gun legislation. Keep our name out of your mouth. https://twitter.com/tedcruz/status/1168602589254029313 … 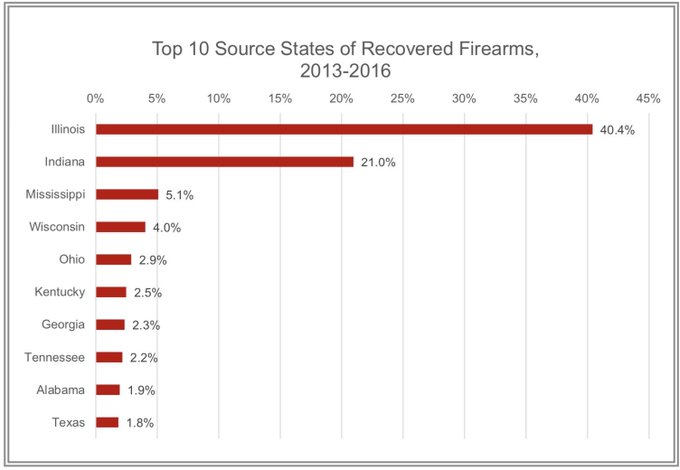 Gun control doesn’t work. Look at Chicago. Disarming law-abiding citizens isn’t the answer. Stopping violent criminals—prosecuting & getting them off the street—BEFORE they commit more violent crimes is the most effective way to reduce murder rates. Let’s protect our citizens. https://twitter.com/breitbartnews/status/1168272622209163270 …

19.2K people are talking about this

“Keep our name out of your mouth,” she wrote. Poor Lori.

What Mayor Lightfoot failed to mention is that the average time-to-crime for those guns (per the ATF) isn’t two weeks. It’s 9.3 years. Clearly Chicago’s gang bangers aren’t sending their girlfriends over to Indiana to buy their guns and bring them back for a weekend of score settling.

Not only that, but Lightfoot contradicts her own Chicago Police Superintendent. Eddie Johnson blamed a lack of consequences for bad guy misbehavior as the top reason for the violence.

Two weeks ago, he fingered judges and prosecutors for the city’s revolving door criminal justice system that’s famous for not sending career criminals to jail.

The superintendent of Chicago’s beleaguered police department shifted the blame for the city’s gun violence epidemic from the cops to the courts, blaming judges and prosecutors who refuse to jail repeat offenders arrested with illegal firearms.

Supt. Eddie Johnson, speaking on Monday at Chicago Police Headquarters, said his department can “only do so much,” but noted “it doesn’t take a rocket scientist to figure out why shootings continue to be a problem in Chicago.”

One simply has to head over to CWBChicago.com to see story after story about career criminals getting arrested for serious crimes. Even when prosecutors actually bother to pursue charges, judges usually release the defendants on their own recognizance.

Part of that is down to Illinois’ new affordable bail law. Part of it is simply lenient judges.

Take this case, today’s top story as reported by CWBChicago.

The story of a Cook County judge who nixed a repeat gun offender’s no-bail order, set bail at $100,000, then released him without requiring that he actually pay bond is even more ridiculous than we knew.

It turns out that the defendant in the case not only has a lengthy criminal history in Illinois, but he also did eight years of federal time for being a felon in possession of a handgun.

As CWBChicago reported exclusively on Tuesday, 47-year-old Joaquin Urcino was arrested in July after prosecutors say he fired a handgun from the second floor of his home in Little Village. Cops say they found a gun in his pants pocket, another gun near a window where they saw him standing, as well as five grams of cocaine in his backpack.

A judge ordered him held without bail, but Urcino had much better luck when he appeared in front of Judge Carol Howard on Aug. 22. That’s when Howard agreed to strike the previous judge’s no-bail order and set a new bail of $100,000. Then, Howard did something special. She told Urcino that she would put him on electronic monitoring “in lieu of bond” and agreed to let him come-and-go to work, too.

That’s a pretty sweet deal. Especially since the original crime, according to cops, involved Mr. Urcino illegally firing his illegal gun out of his window.

Here’s another story from earlier this month about a guy out on bail for one gun case who then (allegedly) shot and killed another man and maimed still another.

It’s been 18 months since Cook County Sheriff Tom Dart warned that he was “alarmed” by the number of accused gun offenders who were being released on their own recognizance, sometimes with electronic monitoring.

It hasn’t been fixed.

Yesterday, 18-year-old Antwane Lashley was in bond court, charged with murder and attempted murder in connection with a shooting on Aug. 23. Lashley has been free on his own recognizance with electronic monitoring since prosecutors charged him with possessing a handgun illegally this spring.

“I believe it is our responsibility to keep these matters in context and not contribute to sensationalizing them,” Preckwinkle told Dart in a letter days later.

As recently as Friday, Preckwinkle called concerns about people committing violent crimes while free on affordable bail, a “fear tactic.”  She has also defended easy bail conditions for gun possession. Some people who live in less-safe neighborhoods feel the need to carry guns for their own protection, she says.

The Cook County Board Chairwoman defended the low bail amounts and criticized publicizing this tragedy that never would have happened if this defendant had remained behind bars.

And people wonder why the Windy City has earned its moniker Murder City USA.

Last summer, The Chicago Tribune drilled down into some of the causes of the perpetual violence. They wrote this as part of the editorial, “Why is there so much shooting and killing in Chicago?“

…There can’t be a rational explanation because Chicago’s plague of urban warfare isn’t logical; it’s horrifically cruel and self-destructive. A 2017 University of Chicago Crime Lab study was able to quantify how much of the city’s gunfire victimizes residents of struggling neighborhoods: Five South and West side communities with 9 percent of Chicago’s population (Austin, Englewood, New City, West Englewood and Greater Grand Crossing) accounted for nearly half the city’s increase in 2016 homicides. African-American men ages 15-34 made up more than half of the city’s homicide victims in 2015 and 2016 while accounting for just 4 percent of the city’s population. Almost 40 percent of victims had prior violent crime arrests.

“One of the ways Chicago is different is that our social conditions are not anything like those now in New York City and Los Angeles,” Jens Ludwig, director of the Crime Lab, told a City Club audience early this year. “We are not just the most segregated city in America, but the level of concentrated poverty we have in our neighborhoods is unlike anything in Los Angeles or New York. You would not find an Englewood or Garfield Park anywhere in Los Angeles and New York.”

The dynamics at play, the ones Chicagoans want to understand to end the bloodshed, are complex. Gang life is a substitute for hope in isolated neighborhoods. Every shooting invites a retaliatory attack. In a city of 2.7 million people, a relatively small number of criminals — perhaps 5,000 to 10,000 thugs and drug dealers — are driving a large share of the violence. “It’s the same individuals that continuously commit these crimes,” Chicago Police Department Superintendent Eddie Johnson said.

And then there’s the issue of the gangs owning plenty of members of the Chicago city council.

From a timeless 2011 Chicago Magazine story:

Gangs and Politicians in Chicago: An Unholy Alliance
LAWBREAKERS, LAWMAKERS: In some parts of Chicago, violent street gangs and pols quietly trade money and favors for mutual gain. The thugs flourish, the elected officials thrive—and you lose. A special report.

A few months before last February’s citywide elections, Hal Baskin’s phone started ringing. And ringing. Most of the callers were candidates for Chicago City Council, seeking the kind of help Baskin was uniquely qualified to provide.

Baskin isn’t a slick campaign strategist. He’s a former gang leader and, for several decades, a community activist who now operates a neighborhood center that aims to keep kids off the streets. Baskin has deep contacts inside the South Side’s complex network of politicians, community organizations, and street gangs. as he recalls, the inquiring candidates wanted to know: “Who do I need to be talking to so I can get the gangs on board?”

Chicago continues to continue its violent decline under 88 years of Democrat machine rule. Of course, just like professional alcoholics, the city’s leaders and their supporters (and the voters) find it a whole lot easier to shift blame and use demagoguery to avoid taking responsibility for the mess their policies have nurtured over the decades.

Better to eat, drink and be merry than confront the real problems that they believe only impact certain people in certain parts of the city.

And just like drunks, they will continue to do so. And to shift the blame. Until and unless voters finally hold them accountable.