DefCon News 10/17/19
There was a time in this country when politicians promised to give you something of value, to improve your lives, and to expand your freedom. The modern democratic party however has nothing but promises to steal your money and squash your rights. During the latest democratic debates on Tuesday, Elizabeth Warren said she will never stop assailing our 2nd Amendment rights. Once she passes some gun control, she’ll pass some more gun control. After that she’ll pass even more gun control and keep going until we are all disarmed.

I don’t know if you’ve ever noticed this before but Elizabeth Warren’s body movements are not unlike that of a chicken pecking at some corn. She may only be 1/1024 Native American, but I bet she can claim at least 25% poultry heritage.

Anyways, her she is Buck-buck-bucking against our Constitutional rights:

Why haven’t we been able to pass any legislation to end the gun violence epidemic? Corruption, plain and simple. #DemDebate 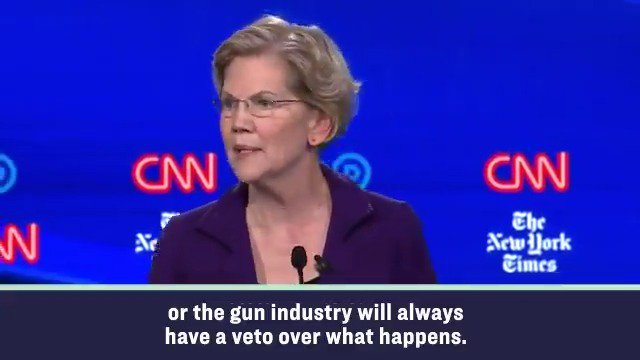 “I want to get what works done,” said Warren of gun control.

Gun control doesn’t work anywhere it has been implemented in this country, mostly because criminals don’t follow the law.

After claiming that we “got machine guns out of the hands of people” with gun control laws, Warren said she’d do the same thing with the rest of our guns.

“This is not going to be a one and done. That we do one thing or two things or three things and then we’re done. We have to reduce gun violence overall,” Warren said.

I don’t know if you’ve noticed this but on the rare occasions when democrats tell the truth it’s way worse than when they lie. Elizabeth Warren is saying if she and her hens are in charge they will continuously pass gun control laws until out 2nd Amendment right are clucked out of existence.

The current gun control proposals from all of the 2020 democratic party candidates include gun bans, gun confiscations, gun registries, more gun confiscation without due process, and magazine and ammo bans. What Warren is saying very clearly here is that this is only the beginning of the democrats’ assault on our Constitutional right of gun ownership

After that brief moment of honesty Warren went right back to being totally full of crap. As you can see by her tweet, she says that the only reason why the democrats haven’t been able to pass unconstitutional gun control is because of corruption.

“I stood in the United States Senate in 2013 when 54 Senators voted in favor of gun legislation and it didn’t pass because of the filibuster. We have got to attack the corruption and repeal the filibuster or the gun industry will always have a veto over what happens,” Warren said.

Well no, it’s not corruption that keeps gun control legislation from being passed, it’s the U.S. Constitution and more specifically the 2nd Amendment which states very clearly that the right of the people to keep and bear arms shall not be infringed.

Also, good luck on getting rid of the filibuster for legislation. Democrats did away with it for judicial nominees and all that did was get 2 conservative Justices on the Supreme Court. My guess is Warren means to ditch the filibuster on legislation when and if democrats are ever in charge of the Senate again.

What Elizabeth Warren did at the debate was say the quiet part out loud and accidentally reveal her party’s true agenda. Democrats are not looking for “commonsense gun safety reforms” they want nothing less than to completely disarm the American people and shred the 2nd Amendment in the process. It’s really the only way they can see to implement their other agenda which is to transform this great country into a socialist s***hole because armed freedom-loving citizens won’t stand for it.