Is the Billionaires Club behind the concerted efforts to destroy our world as we know it? CSN newsletter 10-14-21

“Is the Billionaires Club behind the concerted efforts to destroy our world as we know it?” That is the question we ask in this week’s issue.

In “Billionaires Try to Shrink World’s Population,” Ray DiLorenzo details the 2009 meeting of the “Good Billionaires Club” in New York City, where they all agreed to put action into place to mold the world to their own liking. “Several months later, Bill Gates, in a presentation pertaining to vaccination, confirmed the following; “And if we do a really great job on new vaccines, health care, reproductive health services, we could lower that [the world population] by 10 or 15 percent.” That would mean (in 2010) decreasing the population by 680 million to 1.02 billion people. Gates previously espoused population control through vaccines.”

These people are so insane that they don’t even try to hide their motives and actions.

One part of their plan is through “reeducation,” (read “brainwashing.”) Jim Bratten explains in “Education Tyranny,” how the Biden regime is now working to silence all opposition, including their takeover of our children’s minds.

“Parents in many states have found their voices and are standing to resist the federal attempt to control children, vocally protesting the education tyranny practiced in government schools. They’re attending local school board meetings and demanding that politicization of their children’s minds be stopped, and unauthorized decisions concerning their kids’ health be returned to parents.”

Another technique for control is to foment unrest in our inner cities, stirring up hatred and violence along racial lines. Stephanie Mann, in “American Leaders: Good at War, Failing at PEACE,” advocates creating a team of inner city peacemakers across the country. “Today, residents need a citywide plan that mobilizes and trains an “army” of peacemakers to bring neighbors together. With support, connected neighbors will become responsible for their own safety and less dependent upon police.”

The other failure we are seeing is the Biden administration’s complete inability to get our economy on track. Or is the ruin of America’s middle class and entrepreneurs part of the plan?

In “Biden: The Bully in Chief Reappears,” John Fund explains how Biden’s handlers send him out to threaten those who don’t cooperate with the regime’s goals. They did this with their “vaccine mandate” threat and now they’re trying to browbeat businesses into magically fixing the supply chain bottlenecks that are undermining our economy.

And when they run out of ways to deflect blame for their horrific handling of economic issues, DefCon News points out their fallback position for anything bad is to “Blame Trump.” Their article is “Biden Administration Finally Gets Around To Blaming Trump For Supply Chain Crisis.” “Cargo ships are stacked up at our ports, trains are backed up for miles, and there’s no truckers to deliver goods to stores. All of this adds up to empty store shelves, high gas prices, and surging inflation.”

As we have noted in recent issues, the patience of the American people has run out, even that of those who voted for Biden and his cronies in Congress. We need to share the news with everyone we can and hasten the day when the wheels on the Globalist/Progressive bus start to fall off for good.

It’s May 2009, the world’s billionaires secretly get together at Rockefeller University, a graduate school of biological and medical sciences in Manhattan. They’re having drinks, the finest cognac and wines, dinner, the best of everything, with people scurrying to grant them their every need. But, their purpose was not social. It was a strategy meeting, an important discussion… a discussion on the world’s population. As they see it,…the definitive crisis of the millennium.

The headline was reported by The Wall Street Journal and The Sunday Times of London. Very few news gathering outlets showed interest.

In attendance were Bill Gates, Warren Buffett, David Rockefeller (now deceased), Eli Broad (now deceased), George Soros, Ted Turner, Michael Bloomberg, Oprah Winfrey, and others. Globalists and Liberals all. The Wall Street Journal reported the meeting of the “Good Club” as they called themselves, on May 26, 2009. It is only now that the meeting is beginning to see the light of day.
END_OF_DOCUMENT_TOKEN_TO_BE_REPLACED

There’s a concerted effort under way to silence opposition to the Biden (Obama) Regime’s agenda to destroy this republic. ANY opposition to that agenda – against vaccine mandates, mask mandates, election fraud, attacks on patriotic expression, or the teaching of Critical Race Theory in schools – is forbidden. Biden’s DOJ and FBI are fully politicized and weaponized, ready to carry out his threats to force obedience.

Unbelievably, the next targets for Biden’s East German style Stasi (secret police) are American parents – fed up with the insidious indoctrination of their children.

Parents in many states have found their voices and are standing to resist the federal attempt to control children, vocally protesting the education tyranny practiced in government schools. They’re attending local school board meetings and demanding that politicization of their children’s minds be stopped, and unauthorized decisions concerning their kids’ health be returned to parents. If the Biden Regime’s plans for transformation of our nation are to succeed, these unruly parents must be silenced. Their speech, objecting to the Democrats’ Marxist agenda for their children, cannot be allowed. Dads and Moms could be arrested …

END_OF_DOCUMENT_TOKEN_TO_BE_REPLACED

During the summer of 2020, Portland, Seattle, Chicago, New York, and other cities were burned, looted, and vandalized as citizens and 2,000 police officers were injured. There was little or no discussion from politicians. However, when the Washington Capital was breeched, violence became the topic of discussion. Among Americans, “one in three now believe that violence could be justified to advance their parties’ political goals.” (Source: Politico) What happened to American values? Are we regressing into warring tribal parties?

Before World War in 1941, Americans had intact families, safe neighborhoods, and peaceful cities. Men were motivated to join the military, women worked in factories and all Americans sacrificed for the war effort. Our leaders became good at organizing and training Americans to serve in the Korean War, Vietnam, The Gulf War, Afghanistan, and the Wars with Iraq and Syria. The question is if we can mobilize for conflict, why can’t we organize for peace?

Let’s restore peace in America! We need an army of trained peacemakers and a plan for every city to create safer neighborhoods.

END_OF_DOCUMENT_TOKEN_TO_BE_REPLACED

You can always tell when Biden’s White House aides panic over the president’s sliding approval numbers. They send him out to bully people. Last month, he ordered private employers to mandate vaccinations for their employees. This week, new inflation numbers prompted Biden to call out companies involved in the global supply-chain bottleneck.

“If the private sector doesn’t step up, we’re going to call them out and ask them to act,” Biden told reporters.

Jen Psaki, the White House press secretary, followed up by acknowledging consumer concerns about Christmas deliveries. When asked if the administration can guarantee holiday packages will arrive on time, Psaki said, “We are not the Postal Service or UPS or FedEx, we cannot guarantee.”

END_OF_DOCUMENT_TOKEN_TO_BE_REPLACED 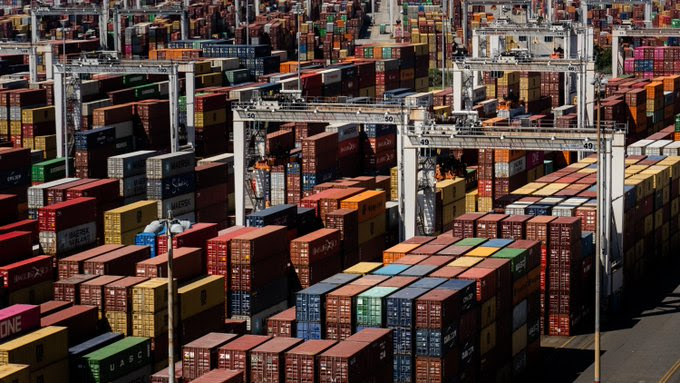 by DefCon News  –  10/14/21
Next to “come on, man” and “badakathcare” Joe Biden’s favorite saying is “the buck stops with me.” Of course saying something and understanding what it means are two different things. The buck clearly doesn’t stop with Joe because he literally blames all his failures and catastrophes on the previous administration. That’s why it’s so puzzling that he just got around to blaming Trump for his supply chain disaster.

Cargo ships are stacked up at our ports, trains are backed up for miles, and there’s no truckers to deliver goods to stores. All of this adds up to empty store shelves, high gas prices, and surging inflation…

From Frankspeech.com: Worldview Radio- America is at war with enemies foreign and domestic and resisting unlawful Government agents is lawful and constitutional – 10/14/2021

From Liz Wheeler (formerly of One America): Shut Down Newsom’s Ethnic Studies | Ep. 62  –

From The Epoch Times- The nation Speaks: Parents Targeted by FBI Won’t Back Down; IRS Plans to Monitor Your Bank Account – 10/8/21

– 10/13/21 – Carol Swain is a nightmare for the Left because, raised in rural poverty, she overcame

American Minute by William J. Federer – American Minute for October 14 – He was imprisoned in the Tower of London for 8 months because of his Christian faith. He was born on this day in 1644 — his name was William Penn.

From The Daily Caller: Our Representatives, Not J6 Protesters, Defile the ‘Sacred’ US Capitol – 10/11/21

From The Epoch Times: Google Banning Ads With ‘Inaccurate’ Content on Climate Change – 10/14/21

News From Texas – From The Epoch Times: Chaos in Texas After Hospital Employees Fired for Refusing to Get Vaccine Demand Their Jobs Back – 10/14/21

From BizPac Review: Seattle’s vaccine mandate may soon result in up to 40% of already gutted police force being fired