Thursday, will be Thanksgiving Day, so with the intent to keep with a more pleasant day of gratitude and thankfulness, the Citizen Voice will post this, our main newsletter today and post a more “peaceful oriented” edition on the holiday. However, there are no promises in such a toxic politically-charged environment. We offered our Sunday edition as a sort-of warm up for Thanksgiving with many music videos to set a better mood for the week. Additionally, my article was a focus on the history preceding the “First Thanksgiving that is not taught in history classes – certainly not by those who use the 1619 Project as a weapon and as a “truth-anmemic” substitute for history, let alone the true history of the United States. In case you missed Sunday’s edition, one can go here.

So, since Thanksgiving Day is just a couple of days away, we are blasting a lot of the news stories we have in our “information silos” out in this edition today. So many events are proceeding forward at a rapid pace, and it may seem overwhelming at times to keep up with the literal glut of information bombarding the public realms. Since there is much news in the newsletter today, we will get straight to our lineup of articles.

There is plenty of perspectives to float around for the rest of the week, so readers may want to read wisely from the healthy helpings of wisened thought by the contributions from our writers today. We have several writers expressing discontent about the efforts of the Biden-Obama regime.

Distinguished author John Fund’s article, which appeared originally in the National Review takes a very hard look at what he refers to as “Joe Biden’s Godzilla spending bill.” He explains that the Democrats (who in the House have rammed the bill past the existing Republican opposition) are likely ignoring the CBO’s warning that the effort of spending the mind-boggling amount of taxpayers’ money is truly unsustainable debt. And, when a political party puts their purposes over the nation’s well-being, one gets what the people “voted” for across the nation as they gave control of the government’s pocketbook to the Democrats.

Writer, A. Dru Kristenev, posting originally in Canada Free Press, goes even further than my slant. She slams the nation’s elected representatives: “Elected representatives – however they reached their position – abrogated their oaths of office to protect the Constitution if they, in any way, have allowed laws to be enacted that restrict, confine and oppress Americans. It is not their job to shut down the economy and destroy the nation by perpetuating a fiction, regardless of what the rest of the world does or believes.” It is worth the read to get a clearer perspective on the Democrat’s intent to economically destroy America.

Jim Bratten also looks at Biden’s “Build Back Better” spending extravaganza and views it more as a “Build Back Beijing” initiative. He examines the spending plan from a more  international perspective. He refers to Indiana Congressman Jim Bank’s analysis of the spending monstrosity: “Congressman Banks and his staff dug into the 2,600-page plan for American destruction and renamed the Marxist Democrats’ dream plan Build Back Beijing, since that is precisely what this economic scheme does. In a report from the RSC, Banks gave examples of what the Democrats’ giant tax and spending bill gives Communist China … a massive boost to their economy.”

And, since we mentioned Canada Free Press, we offer an article from editor Judi McLeod, which pulls no punches at exposing the strings Obama has attached to the White House and especially his puppet-in-residence. She offers a “wide-angle” perspective in viewing how Obama’s tenure has laid the foundation for this recent debacle. She also examines Amazon owner Jeff Bezos’ recent gift to Obama. “Bezos’ buddying with Obama comes as Amazon clashes bitterly with the Biden administration over antitrust issues. Lina Khan, the Biden-appointed chief of the Federal Trade Commission, has a long history of blasting what she says are anticompetitive practices by Amazon…” McLeod’s piece is worth reading as it helps readers see the strings that are being pulled just now.

Our last article in the lineup is from Craig Huey who exposes Wikipedia and how they are no longer the organization that it started out to be, but now even one former founder it is warning about the use of  Wikipedia. His article “Co-Founder Says Wikipedia Only Uses Pro-Socialist Sources and Blocks Anything Conservative, Libertarian or Christian,” may shock some, but would not surprise those who have used the online tool recently.

Please enjoy our articles, but beware, read them before Thanksgiving so you are not prone to indigestion after consuming unsettling news and views.

Democrats are getting ready to mug the referee who presided over the analysis and scoring of Joe Biden’s Godzilla spending bill.

The Congressional Budget Office looks as if it’s about to disappoint Democrats with its estimate of how much money can be raised by doubling the size of the IRS to chase down taxpayers. The CBO may also find that other major parts of the Biden plan cost up to $1 trillion more than original Democratic estimates of the cost.

At the same time, White House deputy press secretary Andrew Bates pretended to claim that the CBO’s conclusion would be old news and best forgotten quickly: “This is something that has been known for months and everyone is on the same page.”

END_OF_DOCUMENT_TOKEN_TO_BE_REPLACED

Lack is plenty, emptiness is fullness, bad is good.

The ‘less is more’ narrative coming out of the White House is expected to groom Americans to believe that returning to the dark ages is a giant step forward for Mankind – pardon, “humanity,” because they strive to address the animal nature of Man, the “hu” in humanity. This White House peddles fear to induce obedience, preying on emotions by seeding distrust of logic since logic undermines its and Congress’ agenda to bring us to our knees.

Thanksgiving is upon us this week where families will be paying 14% more for their feasts1, the highest ever. The Biden administration is using its podium to set-up the American people to believe that we should be grateful for the empty shelves, the highest prices of gas and groceries in 40 years and their planned disruption of heat and energy that will destroy lives and homes like Texas’ February freeze that was engineered by Biden’s Department of Energy. And, by the way, could have been easily ignored by the governor whose loyalty was to his constituents, not a regulatory agency.

However one looks at this disastrous plan for the United States of America, Joe Biden’s “Build Back Better” bill (a plan to bankrupt our nation with a green-is-good, massive socialist spending spree for items unaffordable and unforgivable) will cripple our ability to prosper for decades, burdening generations of our children in debt.

Some of us call it the Build Back Bankrupt bill but, as Rep. Jim Banks (R-IN), Republican Study Committee (RSC) Chairman found, there’s a country that definitely benefits from this huge pork pie: Communist China – and certainly Joe’s benefactor for the Biden Family Influence-Peddling business, his friend Xi Jinping, the country’s dictator and chairman of the Chinese Communist Party.

Congressman Banks and his staff dug into the 2,600-page plan for American destruction and renamed the Marxist Democrats’ dream plan Build Back Beijing, since that is precisely what this economic scheme does.

Rip the tacky wrapping paper off of ‘Obama’s 2021 Thanksgiving Gift to America’ and let the wind blow it away. Obama is hoping it’s the last Thanksgiving Gift he’ll ever have to give because his and his globalist master’s plan is to have America fully ‘disappeared’ by the GREAT RESET on or before Thanksgiving 2022. Barack Hussein Obama’s final gift to the people of the country that brought him so much fame and fortune?

Joe Biden, completely under Obama’s personal control. A temporary president who personifies Obama’s arrogant and defiant ‘Fundamental Transformation of America’ : a visibly doddering old dude, real or pretending to be. The former or the latter matters not because Biden serves the purpose of signally to her enemies, that America is far too weak to fight back, and therefore vulnerable to massive takedown.

Up to the fateful year of 2008 when Obama was first elected president,  America, by and large, celebrated Thanksgiving with pride and joy as the Holiday celebrating its pilgrim founding; a day when people of every race, color creed, and from all walks of life thank God Almighty for His generous and loving Bounty. Things have changed dramatically over the past five years…

END_OF_DOCUMENT_TOKEN_TO_BE_REPLACED 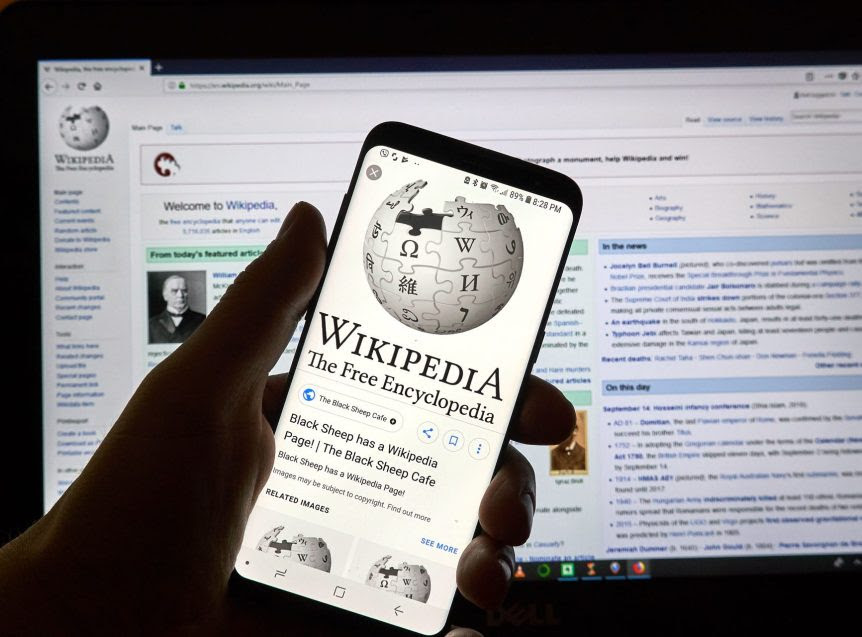 Wikipedia is not objective. It’s written from a pro-socialist, secular anti-Christian anti-conservative, anti-libertarian worldview. When you read Wikipedia, it’s a biased review. When I objected multiple times about my listing, I’ve never been able to change it. This is common.

Watch this video with the co-founder of Wikipedia. It’s with Larry Sanger who in 2001 cofounded Wikipedia, but Sanger left the company a few years later.

From Children’s Health Defense: As Reports of Injuries After COVID Vaccines Near 1 Million Mark, CDC, FDA Clear Pfizer, Moderna Boosters for All Adults – 11/19/21

From Bannon’s War Room: Erik Prince: We Have A Defense Of Western Civilization Issue – 11/23/21

From The Blaze: World Tennis Association threatens to pull tournaments from China over Peng Shuai disappearance: ‘This is bigger than the business’ – 11/18/21

From The Blaze: Tennis star missing since making sexual assault allegations against high-ranking Chinese official — and now UN wants to know her whereabouts – 11/19/21

Podcast – From Dinesh D’Souza: THE RITTENHOUSE EFFECT – 11/18/21 – In this episode, Dinesh examines the Rittenhouse verdict in its widest significance, drawing out its implications for Antifa, the demonization of Trump supporters, and gun rights.

Uncommon Knowledge: Glenn Loury’s Journey From Chicago’s South Side to The Ivy League And Beyond – 11/22/21

California on Your Mind: The Sound Of Silence In Sacramento by Bill Whalen – 11/18/21

From Washington Examiner (w/ video): The many Russian links to the operatives behind the Steele dossier – 11/22/21

News From The Growing Free Union – From National Review: Fifteen States Threaten to Cut Off Banks That Refuse to Service Coal, Oil Industries – 11/22/21

News From Washington state – From FOX 4 – KOMONews: Amid crime surge in Seattle, some take steps to defend themselves – 11/19/21

Excellent Election Education Resource: US 2020 Election Fraud at a Glance